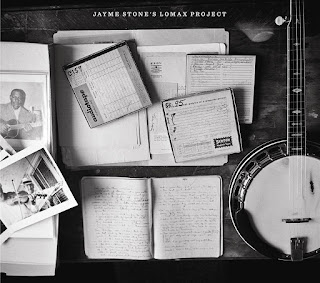 Canadian Banjo player Jayme Stone read a biography called "Alan Lomax: The Man Who Recorded The World" (by John Szwed) and, realising that the centenary of Lomax's birth was approaching, had a light bulb moment in which he envisaged a centenary project to pay tribute to Lomax's many and varied field recordings.

At various folk festivals and musical gatherings he began to workshop re-imaginings of some of the vast array of music that Lomax recorded in the latter two-thirds of the Twentieth Century across the North American continent, the Caribbean and the UK. A Kickstarter project ensued and enthusiastic fans helped Stone's fabulous vision to take shape.

Starting in 1933 with a Model A Ford, an Edison acetate disc-cutter, a stylus made of cactus needles and a microphone, Alan Lomax began a life's work (continuing that of his father) of creating an aural record of the Folk traditions of America for the Library of Congress and The Smithsonian. As he wrote in the official record of his 1937 trip around the rutted, unmade back roads of Kentucky "A collector of folk song lives and works by the kindness of the people in the localities to which he goes." This kindness still shines through in these performances by Jayne Stone and his accomplished collaborators.

Margaret Glaspy and Tim O'Brien contribute a vocal tenderness, and the instrumentation throughout (banjo, accordion, fiddle, guitar, bass, drums, mandolin) is in sympathy with the original Lomax recordings. The virtuosic improvisations of the modern day musicians take these songs or tunes to new places but stay very true to the originals. The Lomax Project manages to find the perfect balance between inheritance and invention.

There are some jaunty instrumentals here, and some soulful accapella ("The Devil's Nine Questions is outstanding). There are some sea shanties (I never knew that "Shenandoah" came from French-Canadian voyageurs and tells the story of a Missouri river trader who courted the daughter of Native American Chief Shenandoah for seven years). There is some truly magnificent Appalachian Bluegrass playing, some Southern Blues inspired by Lomax's recordings of Leadbelly, Fats Domino and Muddy Waters and some African-infused working songs from the days of Slavery. There is a Travellers' Song from Scotland and even a Calypso, "Bury Boula for Me", from Trinidad given perfect voice by fellow Canadian Drew Gonsalves of Kobo Town.

Many folk ballads that one hears in the "New World" travelled from Britain to the lumber camps of Nova Scotia or the Appalachian Mountains providing something of a time capsule. One of the songs in this collection can be traced back to Child Ballad No. 1 from Francis James Child’s collection. The earliest version can be found in a handwritten manuscript from 1450 housed at the Bodelian Library in Oxford. As Stone points out in the sleeve notes, "The songs come from sea captains, cowhands, fishermen, homemakers, prisoners and farmers: extraordinary, everyday folks making homemade, handmade music."

The honesty and generosity of these extraordinary people were captured so well for posterity by Lomax's recordings, and Stone makes me want to track down Szwed's biography to find out more about the life and adventures of Alan Lomax and the people he encountered along the way.

Posted by Solomon Robson's Blogspot at Saturday, October 31, 2015 No comments: