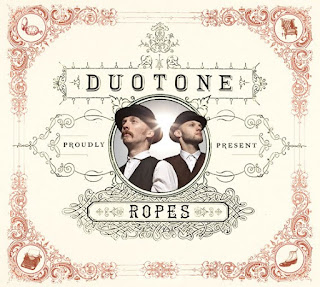 Duotone started as a vehicle for Barney Morse-Brown to escape the straight-jacket of his classical training. He has been playing cello since the age of six but grew tired of the constraints of the classical world. With this new CD "Ropes", I would defy anyone to find a box into which his music would neatly fit. Having been an integral part of The Imagined Village for a while, he has now collected together several years' worth of his own songs and tunes. He has somehow combined his classical, baroque, folk and improv experience to create a very English music that satisfies on so many levels. There are instrumental interludes throughout that resemble the soundtrack to a somewhat intense movie. These give way to alternately gentle and soaring vocal harmonies and in turn to further interludes where Morse-Brown really lets rip and attacks the cello with complete abandon. There is a wistful and poetic philosophy in the words that is quite affirming. Themes of time passing and impermanence are repeatedly touched upon, but the overall feel on this release is one of optimism. He now works in tandem with James Garrett, classical guitarist turned percussionist extraordinaire, resulting in a more rounded, fuller sound than on the first Duotone Cd. It feels as if Garrett has brought a certain amount of lightness to what is now a duo. On his self-penned song "Set It Down" - one of my favourites - he sings "Put the mallet down on the bench, and come and have a cup of tea". He also brings a more uptempo, beat-oriented approach. Garrett's cajon and mini drum set really drive the show along. On "Ropes" the two are using live analogue loops to create layers of sounds - multiple tracks of cellos, guitars, voices and percussion are able to be brought in and out of the mix. No laptops, no computers, no pre-recorded music - this is all done live, and with a huge sense of fun. The pair dress (and sport facial hair) like something out of "Deadwood" - a carry-over from Morse-Brown's classical days, when it was second nature for him to get into a smartly starched costume for a performance. For the two stand-out tracks on the album, "Powder House" and "Turning Pages Over", the sublimely beautiful harmonies of their own voices are enhanced by the heavenly vocals of one Raevennan Husbandes. The"Quintone Strings" and the "DuotoneChoir" also feature to great effect throughout. Truly an inspirational and refreshing addition to the English music scene. Duotone have a youtube channel with a preview of "Ropes"
Posted by Solomon Robson's Blogspot at Monday, May 28, 2012 No comments: