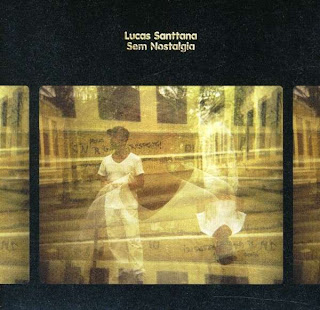 Lucas Santtana is someone who first toured internationally in the nineties with Caetano Veloso and Gilberto Gil. Back home in Bahia, Brazil he took inspiration from his former mentors and honed his own unique brand of Tropicalia to perfection. This is his fourth CD but the first to make considerable - and very deserved -  waves outside Brazil.

For this project Santtana set himself some constraints. He resolved, in tribute to the likes of Gil and Joao Gilberto, to use only "Voz e Viola" (Voice & Guitar). But in the true spirit of operating "Sem (Without) Nostalgia" he has given the concept a thorough 21st century makeover by processing ambient sounds through all manner of unconventional recording techniques to create the most remarkable soundscapes.

"Filmic" is a description that springs readily to mind for several of the songs - he sings half in Portuguese and half in English - and it comes as no surprise to read an interview with Santtana in which he talks of creating each song as a miniature movie. It is music as if heard in a dream, never more so than on "Recado pro Pio Lobato" with jangling bells, distant guitar chords and somewhat unsettling echoey vocals.

The bizarre and discordant can often be a turn-off, but on "Sem Nostalgia", Santtana makes sure he takes us along with him. The jarring electronic touches are cleverly counter-balanced with the slow harmonious acoustic gems such as "Night Time In The Backyard" and "Hold me In". And then the dream-like Bossa Nova kicks off again on "Amor em Jacuma". There are echoes of John Lennon, Radiohead and Tunng throughout the album, particularly on the insistent "I Can't Live far From My Music", before we once again chill in the hammock under the palm fronds with "Ca Pra Nos".

Another light-hearted techno mash-up of sampled guitars and beats on "O Violao de Mario Bros" is followed by the ever so gentle "Ripple of the Water" and we finish up with "Natureza #1 em Mi Maior", discovering the most beautiful music in the processed sounds of water, frogs, birds, cicadas and the pulsating tropical night air.

The track I keep coming back to on the Local Global Show is the Cd's opener, "Super Violao Mashup". This doesn't even feature Santtana's own guitar, rather samples of his heroes' riffs with loops and beats interspersed to great effect. Check out the youtube video for this one, in which he playfully "referees" a very competitive Dance-Off between a man and a woman on a seafront promenade in Rio. Chunky moves guaranteed.

Posted by Solomon Robson's Blogspot at Thursday, February 16, 2012 No comments: