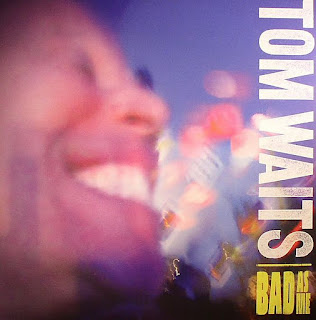 "ALL ABOARD!" hollers Tom Waits towards the end of "Chicago", the opening track on this, his first release of brand new material in seven years. In the meantime, we have been offered "Orphans", a rag-tag compilation of his misfit progeny (as he likes to view his songs) and a 2009 Live album, that almost (but not quite) whetted the appetite.

For some time now Waits has produced albums that contain moments of sheer brilliance, but which often frustrate because he's just not that bothered whether you tag along for the ride. I'm thinking "Mule Variations", "Bone Machine" and "Real Gone": He and his kids (metaphorical and literal) were having way too good a time banging and clattering found objects in the barn for it to matter whether anyone was listening.

With this "All Aboard!", at the end of an opening track that steams along to an exciting new life in an unseen "Chicago", he's signalling that things are going to be different this time. "Raised Right Men" and "Talking at the Same Time" are up next and you find yourself singing along even though you haven't heard them before. It's becoming apparent that, at the behest of Kathleen Brennan, his partner in life and songwriting ("she washes, I dry" says he), this is snappy, to-the-point Tom Waits. She has instructed him to "Get in, get out, no messing about!" and he's done as he was told.

Waits struggled with a direction for his muse after 1978's sensational breakthrough album "Blue Valentine". His next release "Heartattack & Vine" showed that the "industry" was trying to push him into "rock star" territory and that just wasn't him. He met Brennan on the set of a Francis Ford Coppola movie for which he was writing the soundtrack ("One From The Heart"). The citically-acclaimed trifecta of "Frank's Wild
Years", "Swordfishtrombones" and "Rain Dogs" followed in quick succession, with the latter being regarded by many as the mother lode of the Waits oeuvre and introducing us to his magnificent cast of down-and-outs, circus freaks, exotic far away places, tattooed tears and "rooms that take on the dreams of those who've slept here".

On "Bad As Me" it is obvious that Waits is having immense fun with his fabulous band of musicians, never more so than on the ebullient title track. His son Casey is still there banging things. Flea, bassist with the Red Hot Chilli Peppers, and the multi-talented Mark Ribot are along for the ride, as is the "truck-load of guitars" and fine Country voice of one Keith Richards. His duet with Tom on "Last Leaf", a literal paeon to the last leaf on a tree in the back yard, is astonishingly beautiful. Richards' snarling guitar riffs render the anti war song "Hell Broke Luce" that much more savage an indictment of Bush's Iraq War . "Satisfied" is in answer to Jagger and Richards directly, and is another rollicking great rock and roll song, like the unadulterated rockabilly of "Get Lost", which invokes the spirit of Wolfman Jack from Waits' misspent youth.

Using Waits' own categorisation of his compositions, there are several 'bawlers" included, to counter-balance the aforementioned "brawlers". "Face to the Highway", "Back In The Crowd", "Kiss Me" and "New Year's Eve" are all gentle, sentimental late night bar room ballads that conjure up the gravel-voiced Waits of old, when the piano had been drinking, not him. The last of these even features a corny rendition of Auld Lang Syne for good measure.

Now if only we can persuade him to leave his California farm long enough to come Down Under and let us enjoy his live shows, which really are a sight for sore eyes.

Posted by Solomon Robson's Blogspot at Saturday, December 03, 2011 No comments: