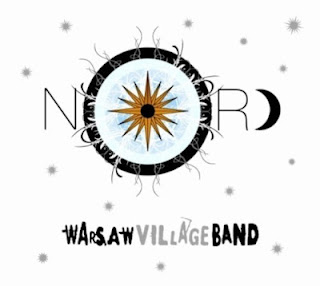 Poland's Warsaw Village Band have been performing their modern youthful take on their nation's folk traditions since the late 1990's, but only came to wider international attention with 2003's memorable "People's Spring". Their sixth CD "NORD" has just been released by Jaro in Germany and in spite of a revolving door policy which has seen band members coming and going for parental leave over the last few years, they have built a consistent body of work that has improved with each release. The creative duo of Sylvia Swiatkowska and Magdalena Sobczak, playing violin and dulcimer respectively, are at the core of this incarnation of the WVB. Their vocal harmonies are as tight as those of the Bulgarian Women's Choirs, although with an endearing hint of schoolyard sing-song lilt. The WVB violinists - with Sylvia playing an old Polish violin that resembles an Indian sarangi - give the music a drama and forward momentum, a real edginess at times. For "NORD", the WVB are joined by Swedish cult folkies Hedningarna, who bring along their bagpipes and hurdy-gurdy for extra atmospherics. Double bass and frame drums complete the line-up, at times providing trance / dance qualities to the music. In the past, their sounds have lent themselves beautifully to dub reggae remix versions, and the dub production sensibilities are plain to hear on "NORD". The mission with this CD was to chart the common ground between the Slavs, the Scandinavians and the aboriginal peoples of the Arctic, the Saami and Innuit cultures to which the WVB feel so connected. Echoes of these traditions are woven into these songs of the new urban Polish peasantry. The songs on "NORD" have been given such old style names such as "Whoa Bullocks Whoa", "Musicians are A-Playin' " and "You Sure Know What's What, Lass". The band are punky but, by and large, all highly trained, some from classical backgrounds. These are not mere "yokel's" - so it is with tongue firmly in cheek that the searing opening track, featuring the newly-added layer of wild eyebrow-singeing blasts of jazz trumpet, is called "Hey you, Yokel's son!" The stand out track for me is when Canadian musician Sandy Schofield joins them on vocal's and shaman's drum for "War is Coming". That is when it feels that the band have truly achieved what they set out to do, putting their fingers on the strong cultural bonds between the peoples of the North.
Posted by Solomon Robson's Blogspot at Saturday, June 30, 2012 1 comment: