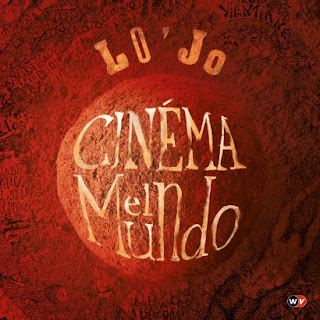 In September 2011 the members of Lo'Jo gathered at their farmhouse - "La Fontaine du Mont" - in the Angers countryside in the West of France. It was time to put together a record to celebrate thirty years of playing genre-defying music and travelling the world together, and what better venue than the place they had used as a communal base for so many of those years.

Special friends were invited: Stephane Coutable with his bassoon, Vincent Segal and his viola, Guo Gan and his Chinese erhu, and Andra Kouyate brought his n'goni. Assorted singers and percussionists, guitarists and brass and woodwind players showed up. As did Robert Wyatt with that golden voice. Friends from Tinariwen even dropped by. One of the groups founders, Denis Pean had written some fine poetry for the occasion which he delivered with his own totally uniquely French, alternately whispering and growling voice. Pean's delivery was balanced as ever by the haltingly, serenely beautiful harmonies of the Nid El Mourid sisters, Nadia and Yamina.

Between recording sessions, round the giant table in the kitchen, sumptuous feasts of rustic peasant food and wine were enjoyed by all. The assembled musicians, singers and storytellers take us on a journey all over the Earth, as if re-tracing their own global experiences of the last thirty years. It is such a cliche to call music filmic, but with this album it is hard not to. I don't know whether the title "Cinema el Mundo" came first or whether it seemed the obvious title for such a collection of vignettes, but filmic it most certainly is. The chosen (often sparse, sometimes lush) instrumentation gives each piece its own unique sense of place - with "Vientiane" and "Alger", for example, we are right there, within the first few bars.

Each of the fifteen songs tells its own story, like a self-contained short film, with Pean's masterful poetry to the fore - "Tout est (All is) fragile, important, fugitif. Tout est eternel" The "Marseillaise en Creole" is a mad and glorious look at all that is great about multicultural modern-day France Reciting poetry in perfect French, Robert Wyatt opens the CD. He returns to sing on the sublime title track. My own favourite is "African Dub Crossing the Fantoms of an Opera" which features the ensemble at their dance-able best.

With musicians from all over the place and all manner of genres visited, Pean describes this venture as "an affaire of the world, collective, sometimes extreme, but also engaged and political" He is often compared to Tom Waits, largely because he stands outside the mainstream of the music "industry", remaining true to his own self and free to create whatever he chooses at his remote farmhouse. This latest creation is a fine way to celebrate thirty years of doing just that.

Posted by Solomon Robson's Blogspot at Tuesday, May 07, 2013 No comments: