The Unthanks "Mount The Air" 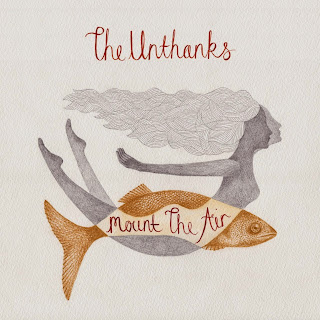 Ever since Rachel Unthank & The Winterset (as they were back then) released "The Bairns" in 2007, they have won critical and audience acclaim wherever Rachel, her younger sister Becky and their various cohorts have ventured.

They have always been very much part of the "Folk" scene - being born and raised in a folk music family and being partial to the whole folky business of communicating common stories of birth, life and death from one generation to the next.

They will also forever be quintessentially Northern English - with their 12th Century Newcastle Unthank family roots and their sense of place on Tyneside, as well as their unmistakeable lilting Geordie dialect, how could they ever be anything other? But this new Unthanks project "Mount The Air" has a broader, more worldly sweep to it's canvas than any of its predecessors.

There are a couple of instrumentals here and much virtuosic musicianship, which merely make those sweetest of sibling harmonies sound ever stronger when they do chime back in. The opening, ten minute title track is an epic statement of intent. It's an old Dorset folk song of a woman's intention to find her lost lover wherever he is in the world, with much conscious borrowing from Miles Davis circa "Sketches of Spain". It's a statement of a group of musicians intent on throwing off their communal musical straightjacket.

We return to the Geordie vernacular throughout. There is a charming rendering of a Charles Causley poem "Hawthorn". There is also a tender almost-accapella (apart from drone) version of the traditional "Magpie". But then there is another swirling, epic tale of lives and loves lost in "Foundling" with more langorous piano and violin, and another melancholy jazz-infused soundscape.

The Unthanks recently collaborated with the Brighouse & Rastrick Brass Band on a series of re-interpretations of their back catalogue. There are several moments throughout "Mount The Air" where that emotion-laden, archetypal Northern English Brass Band sound washes over the listener only for us to then be taken to a whole new unpredictable, slightly warped place.

In recent years The Unthanks have toyed with many directions - covering music by Robert Wyatt, Antony & The Johnsons, King Crimson and Tom Waits. These eclectic and esoteric influences, together with their avowed indebtedness to the storytelling styles of performers such as Nic Jones or The Watersons, give us a bit of an inkling as to where they might be headed, intent on carving their own, uniquely Newcastle niche wherever they go.
Posted by Solomon Robson's Blogspot at Friday, April 24, 2015 No comments: