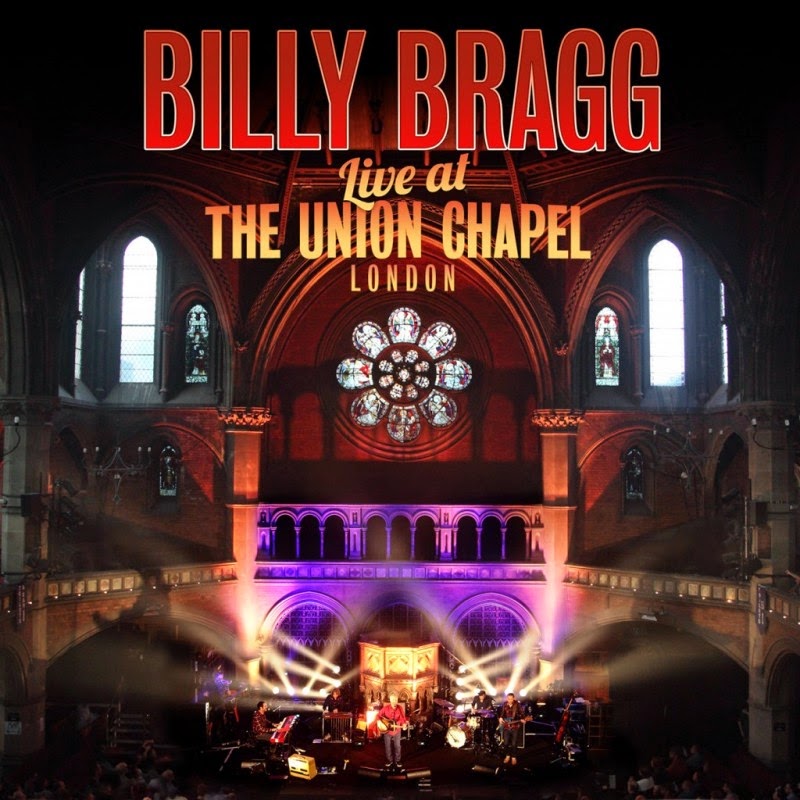 Billy Bragg is like a bottle of Grange - thirty years down the track and he's maturing into the complete package. He's also become a fairly influential political figure, appearing on "Q&A" when he was over here recently and his opinion being sought out by media outlets far and wide when Thatcher died. This CD /DVD combo was recorded just after the demise of "the most divisive Prime Minister Britain has ever had" in the middle of 2013, when Bragg was touring all over the shop to promote his "Tooth and Nail" CD. The Union Chapel - a 19th Century Gothic church in Islington, complete with stained glass windows and ornate pulpit - is the perfect backdrop for this Thirtieth Anniversary celebration. His mix of pop and politics is nowadays infused with some fine musicianship and the timbre of Bragg's voice has changed for the better with age. His newer songs tend to be written in a lower key that suits his older voice well.

What you get here is a carefully chosen cross section of his back catalogue. From "There is Power In A Union" and "Between The Wars" of the Thatcher Years to the more personal political poetry of "Sexuality" and "Valentines Day is Over" from the Bliar Era - all given the Americana / Country treatment that so many blinkered critics have taken him to task for.  I'm not sure why - CJ Hillman's exquisite Pedal Steel and bottleneck National Steel guitar work are second to none, and perfectly matched with Billy's songs. As Bragg points out, there's the added bonus that the American can also pick up a Fender or Gibson and do a fine "Johnny Marr impersonation" for the rockier numbers. On the DVD you get some humorous and insightful commentary from the singer interspersed between the songs, as well as his increasingly droll and relaxed banter with the audience at the gig. Bragg's occasional sermons are laced with an endearing self-deprecating humour and an openness to the ideas of others, both of which give greater resonance to what he's saying. Most of the chit-chat is thankfully edited out for the CD.

What Bragg is saying is as relevant now in Cameron's Britain and Abbott's Australia as it ever was thirty years ago. Perhaps more so with the growth of inequity that we have seen open up. He speaks up for the downtrodden, pricks the bubble of the high and mighty and tries to inspire his audience to activism in the face of this ever-expanding inequity. He reckons that our major enemy is cynicism. His clever way with words and humorous insights, and his relentless optimism that "There Will Be a Reckoning" and "All You Fascists Bound To Lose" are powerful antidotes to such cynicism taking hold. The latter is one of three Woody Guthrie songs that are so wonderfully re-imagined here by Bragg and his comrades - the other two being "Way Over Yonder In The Minor Key" and the sad story of thirties dispossession at the hands of the Banks, "I Ain't Got No Home".

With Bragg there is no real boundary between the personal and the political - his song about the Hillsborough disaster which killed 96 Liverpool Football fans, "Never Buy The Sun", is as pithy a put-down of the execrable Murdoch Press and the British Establishment as you'll hear anywhere, and obviously heartfelt. "Do Unto Others" is an attempt at a distillation of what is necessary to live the Ethical Life, given a certain extra resonance by the ecclesiastical setting. The tear jerker "Tank Park Salute" pays tender homage to his dad - as does the amusing "Handyman Blues" in its own way - and then we are into the timeless rambunctious encore "Waiting For The Great Leap Forwards".

As a one of several bonuses on the DVD we are treated to the second encore, just Billy and his electric guitar revisiting the whole seventeen minutes of his very first vinyl record "Life's A Riot & Spy vs Spy" with classics such as "The Man In The Iron Mask", "The Milkman of Human Kindness" and "A New England" all rattled off in fine fettle. For the audio version unfortunately you have to shell out another few bucks for the official 30th Anniversary ReMastered Reissue - as the man says, "the Revolution is just a T-shirt away". And there's probably a T-Shirt of that at billybragg.co.uk
Posted by Solomon Robson's Blogspot at Saturday, May 31, 2014 No comments: 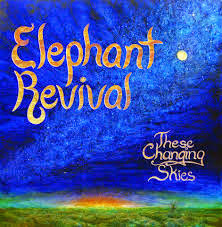 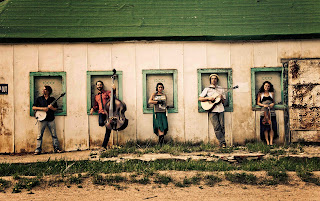 I've never been quite sure what qualifies as "Americana". Wikipedia tells us it is "contemporary music that incorporates elements of various American roots music styles, including country, roots-rock, folk, bluegrass and blues, resulting in a distinctive roots-oriented sound". This quintet from Colorado would seem to fit that bill perfectly. Elephant Revival have recently released their third album "These Changing Skies" to great critical acclaim in the Northern Hemisphere.

There must be something about the rarefied air of the Rocky Mountains that provides great inspiration for them. Their music, album artwork and heartfelt, mindful lyrics are all imbued with a strong sense of nature and belonging. From the CD's upbeat opener "Birds and Stars" (which is available for free from their website) to the closer "Rogue River" and the lovely "The Pasture" instrumental along the way, a strong sense of place seems to inform the sublime sounds they create. At times, if you close your eyes, you could be in a hippy Deadwood.

Elephant Revival play mainly accoustic instruments: banjo / mandolin, double bass, guitar and violin. The latter brings a jiggy, reely Celtic sensibility to what they do. The unique addition of Bonnie Paine's washboard, djembe, musical saw and stomp-box front and centre is what sets this mob apart from other "Americana" acts. Her affecting tremelo vocals, particularly on the philosophical "Remembering a Beginning", are reminiscent of Natalie Merchant. When the three guys take vocal turns, the sound is more like the Decembrists or Bon Iver. The group's close-knit harmonies are quite beautiful.

Several of the songs on the Cd are pure ear-worm material. Intricate enough musically to stand up to repeated plays but catchy enough to provide immediate singalong enjoyment for the listener. Three songs penned by guitar / banjo player Daniel Rodriguez ("Grace of a Woman", "Spinning" and the aforementioned "Birds and Stars") are ones that you find yourself singing as you go about your daily activities. Expect to hear them repeatedly on the Local Global Show on 2BBB in coming weeks!

Posted by Solomon Robson's Blogspot at Sunday, May 25, 2014 No comments: