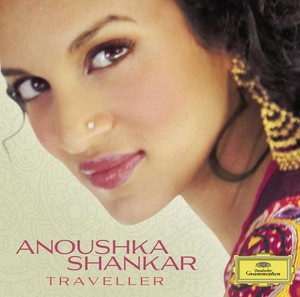 As Nitin Sawhney points out in the CD's sleeve notes “No one embodies the spirit of innovation and experimentation more evidently than Anoushka Shankar.”

She was born in London and raised there, in New Delhi and California. She studied classical sitar with her father, the legendary Ravi Shankar, from the age of 9. Her concert debut was in the Siri Fort, New Delhi in 1995, aged 13. By 15 she had performed with her father at Carnegie Hall and her first record deal was at 16.

Since then she has continued to accompany Ravi, and has also pursued a highly successful solo career playing classical Hindustani music. In 2001, 2003 and 2007 respectively, she released "Live at Carnegie Hall", "Rise" and "Breathing Under Water", collaborating and experimenting with musicians and producers far and wide and gaining three Grammy nominations along the way.

Now signed to Deutche Grammophon, with this new CD "Traveller", Shankar heads off into "Latcho Drom" territory. Like the Tony Gatlif film, this project explores the connections between the Gypsies of Spain and Rajasthan and their seemingly conjoined Flamenco and Indian musical roots There is an assured maturity evident in this release - a confidence, possibly borne of Anoushka now being a parent herself. She fully immerses herself in the shared DNA of the two traditions.

The sparkling chemistry between Shankar and Javier Limon shines throughout.  He is co-writer and guitarist on several tracks and is the inspired arranger and producer of the cd as a whole. Limon says that this encounter with Shankar changed his life, giving him a different concept of his own music. He points out that when Anoushka plays a granaina she plays it like a flamenco singer, not as one might expect, like a flamenco guitarist. Her melodies on the sitar exquisitely replicate those of the voices.

Limon has brought along his compadres Pepe (Habichuela, guitarist extraordinaire),pianist Pedro, plaintive Gypsy singers Duquende and Sandra Carrusco, and Spanish percussionists Pirana, Bobote and El Electrico playing (ahem) "spanish percussion" (cajon, handclaps etc). There is even, on "Dancing In Madness", the frenetic miked-up feet of Limon's friend, Flamenco dancer Farruco to mirror the ankle bells of Bharata Natyam dancer Mythili Prakash. It can be argued that it is in Flamenco and Hindustani traditions that the powerful rhythmic connections between dancer and musician are most evident.

For Anoushka herself, the writing and recording of "Traveller" was also a journey of self-discovery, never more so than when she is playing her sitar accompanied by just Pepe on guitar. The pair playfully nurture "Boy Meets Girl" into existence. It is a spacious creation of simple acoustic beauty, where the granaina and the raga seamlessly interweave and become one, a revelation for musicians and listeners alike. The title track is also a gem, with such fabulous rhythmic interplay between tabla, cajon and sitar overlaid with the Shehnai, the snake-charmer's double reeded conical oboe that is so reminiscent of the subcontinent.

This is a release of such sustained brilliance that it would be churlish to pick out one track. But it would be remiss of me not to mention the glorious heights reached on "Casi Uno".  This is the result of Limon introducing Shankar to his friend and protege, the extraordinarily gifted Equatorial Guinean Flamenco singer Concha Buika. The three of them simply sat around a table and went through the song a couple of times before capturing one of "those" emotionally loaded moments of pure musical magic: the richness and complexity of Shankar's sitar, the simple sweetness of Limon's guitar, the earthenware Indian percussion and Buika's extraordinarily tender voice all in total harmony. I defy you to listen to it and not shed a tear.

Posted by Solomon Robson's Blogspot at Saturday, January 07, 2012 No comments: