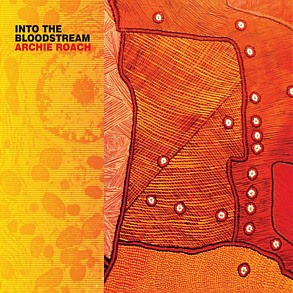 Archie Roach "Into The Bloodstream" This new CD from one of Australia's living national treasures is an absolute revelation. I've always appreciated his work - his breakthrough "Charcoal Lane", his atmospheric soundtrack for "The Tracker" movie and his last release "Journey" are testament to Roach's strong song-writing and story-telling abilities. But I've never really enjoyed his music. His pain was so transparent - and for very good reason, given his stolen childhood and his struggles to cope as an adult - so that his music often made for very uneasy listening. In the liner notes to "Into The Bloodstream" Roach reveals that his own attitude to Pain was transformed during the making of this latest album. He used to think that letting go of his Pain was the only way to get over it, but he came to understand that the Pain may always be there, and that a different attitude to life, some good medicine and the creative process of writing songs about it gave him ways of coming to terms with it. To say that he's had a challenging few years is something of an understatement. First, he unexpectedly lost his soul mate Ruby Hunter. Then, during his grieving, he suffered a debilitating stroke. While recovering from that, he was diagnosed with lung cancer and had to have half a lung removed. Little wonder that he was initially finding it hard to find his muse when first trying to gather ideas for "Into The Bloodstream". The opening title track is familiar territory to those who know his work. But there are hints of a positivity and a lightness that we haven't heard before. The next track "Song To Sing" is a full-blown Gospel number that simply soars. Check out the video for it on YouTube and I defy you not to shed tears of joy. Shot with an indigenous choir and a large ensemble in St Brigid's church in Archie's hometown of of Killarney, it is truly inspirational. "Mulyawongk" is a beautiful tribute to Ruby and her many virtues. "Wash My Soul In The River's Flow", though penned by Roach, sounds like a New Orleans standard and allows Archie to revel in his discovery of whole new registers to his voice. "We Won't Cry" is a gorgeous duet with his old mate Paul Kelly. "Hush Now Babies" (with Emma Donovan) and "Old Mission Road" are touching tributes to his much missed Mother and Father, celebratory without being maudlin. There is so much to like about this album. All I can say is get down to your local record store and BUY IT - without further ado. As Archie says in the sleeve notes (and what lovely artwork too): "Doing this album has been good medicine for me! I hope listening to it will be the same for you!"
Posted by Solomon Robson's Blogspot at Friday, January 25, 2013 1 comment: