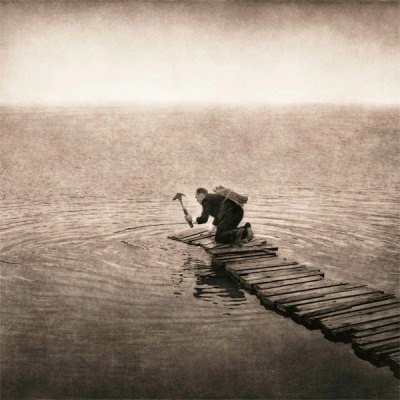 One of the most fabulous aspects of the Bellingen Global Carnival over the years (and there were many!) was the way it would introduce us to previously unknown, but supremely accomplished and talented artistes. One of the most pleasant of such surprises came in (I think) 1997 when Irishman Martin Hayes and American Dennis Cahill came to town with their fiddle and guitar duo and left everyone I knew who saw their shows gobsmacked at their virtuosic musicianship.

When I heard that the two of them had teamed up with legendary Irish sean-nos singer Iarla O'Lionaird, whose emotive vocals grace the Afro-Celt Sound System CD's, I knew something special was afoot. For the debut CD of The Gloaming, they have been joined by Thomas Bartlett (aka Doveman) on piano. When Bartlett was ten years old his family stopped off in Ireland for a break on their way to live in India for a year. Young Thomas was besotted with Hayes' music and discovered that he was performing soon after their arrival in Dublin. He persuaded his family to take him to the show, and to follow the fiddle player on tour around Ireland for the rest of the week. Hayes noticed his young stalker and his parents and they became firm friends.

As the make up of The Gloaming took it's highly unusual shape of vocals, piano, guitar and fiddle, Martin Hayes became concerned that his sole fiddle might become overwhelmed in the mix so he called in Caomhin O'Ragallaigh and his Hardanger fiddle as "back up". This Norwegian violin has eight strings rather than the usual four and creates the most achingly beautiful textured sounds. The music that has resulted from this combination of extraordinary talents and instruments is at once traditional and ground-breaking.

The rules of Irish music are often set aside by the transatlantic nature of the collaboration. There are jigs and reels aplenty ("The Sailor's Bonnet", the sprawling 16 minute masterpiece "Opening Set" and "The Old Bush" will get even the most resistant feet tapping) and there are introspective, moody pieces that are at times haunting ("Song44" - an ancient poem set to music),  mournful ("The Girl Who Stole My Heart") and at others simply serene ("Samradh, Samradh"). Another song with a literary source, "Freedom / Saoirse", literally soars on the wings of O'Lionaird's powerful vocal delivery.

What strikes this listener most about the project is that there is a very deep musical empathy and understanding between the five musicians. It is often the spaces that they leave for each other that speak loudest. They are not a in a hurry to go anywhere or prove anything - they are just transported by the music, as i am sure you will be if you invest in a copy of the CD. As Hayes said in an interview recently
"On a personal level, there are no tensions between us, there are no ego battles, because everyone gets to be themselves and gets complete freedom to express themselves fully"

Posted by Solomon Robson's Blogspot at Sunday, April 06, 2014 No comments: