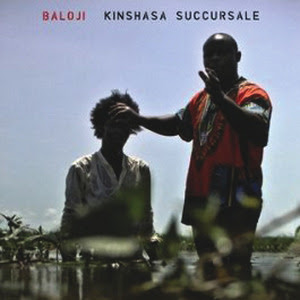 Baloji is a young Congolese Belgian poet / rapper / singer whose name translates as "Sorcerer". Born in Lumumbashi in the DRC in 1978, he was taken from his mother and raised by his step-family in Oostende as a three year old. After some unruly teenage years, he found himself a member of the successful chart band "Starflam" before going solo with a sketchy album called "Hotel Impala". His new release, "Kinshasa Succursale" has followed, under the auspices of avant-garde Brussels label Crammed Discs. It is a reworking of the half-baked debut, turning it into a gem of an album, a newly polished mirror that Baloji holds up to the beauties and horrors of his homeland. With a sound engineer and bass player in tow, he revisited Kinshasa to hang with some of the greats - Konono #1, Zaiko Langa Langa and Royce Mbumba - and has ended up creating a document that portrays a nation riddled with poverty and lacking in basic infrastructures but with more resources than the USA and Europe combined. The opening track has a beautiful retro feel, itself a reworking of the old Grand Kalle rhumba "Independence Cha-Cha". After this sumptuous laid back start, the craziness of Kinshasa's Konono #1 kicks in - thumb pianos distorted through amplification fashioned from old car alternators, whistles, balafons and bits of metal being hit - and all tied together with Baloji's strident French beat poetry critique of things Congolese. There's a variety of styles here - with township jive, Cameroonian style choral pieces - even a hint of R'n'B and Dancehall here and there, but it is always underlaid with Balji's urban angst and the insistent distorted guitars and likembes of modern day Kinshasa. "Kinshasa Succursale" started life as a response to a long-lost birth mother who posed the question "what have you been up to these last 25 years?" It has become so much more. This Sorcerer has used his incisive texts, and - with the backing of beating drums, chants and lamentations - interwoven these into modern dancehall idioms and classic rhumbas. It's given us a deceptively festive music that actually paints a less than pretty picture of what the DRC has been up to these last 25 years. Thankfully, though it is all infused with Baloji's very appealing optimism for the future.
Posted by Solomon Robson's Blogspot at Saturday, March 10, 2012 No comments: