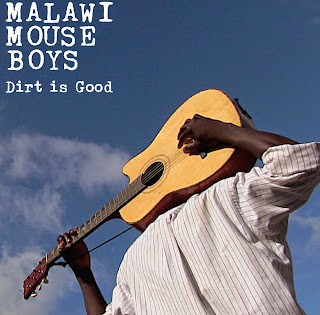 The Malawi Mouse Boys are thankfully back with a second CD, "Dirt Is Good". If you don't know them, a YouTube video of them setting up and performing in the dust outside a mud-brick hut in the rural centre of their land-locked South East African homeland is definitely worth checking out - it's called "Ndinasangalala - I was Happy" and is from their debut CD"He is #1". You will see them using bicycle cogs for hi-hats, and all manner of scrap metal for home-made drums, one string fiddles and guitars. You will also enjoy the eight of them - who have been singing and playing together since childhood - ripping into glorious reggae flavoured gospel harmonies.

Their stated aim is not to make their fortune but just to make people happy by bringing us their joyful, devotional Chichewa language Christian songs. The fact that their roadside performances come with a serve of the local delicacy - the rodent kebabs that are a local delicacy - is just an added bonus. In the Northern summer of 2013, four of their members finally managed to obtain visas and get on planes for the first time ever to sample what the West had to offer. One of the big successes of Womad, their barnstorming high energy frontman Zondiwe Kachingwe got audiences going wherever they played and, for very good reason, earned him comparisons with the young Stax singers of the sixties, Otis Redding and Sam Cooke.

Haling from one of the poorest nations in the world where male life expectancy is below 50, one can only wonder what is going through their heads as they marvel at the the bright lights and blaring music of a fairground while on tour in the UK(in another recently posted video for the track "Kufana"). Every day back home these four young men face the dangers of Black Mambo snakes and wild boars while hunting for mice to grill for passing travellers. It would appear that 50000 strong festival audiences are hardly a daunting prospect for them. The fare they bring us on this new CD is very similar to that on their first one. Rustic, sparse instrumentation, hands clapping, lots of whistles, strummed rudimentary guitars - sometimes fuzzily amplified this time around, to great effect - and glorious harmonies. Each song is short and sweet - there are 15 cracking tracks included here, although one is largely a heated argument over artistic differences, or so it seems, my Chichewa not being massively fluent.

Sierra Leone's Refugee All Stars have just released their fourth superlative CD after starting from similarly humble beginnings several years ago in a refugee camp in West Africa. With each release they have become more and more polished, professional and produced but their original joie de vivre still shines through. It will be interesting to see where the Malawi Mouse Boys go with their sound, if and when the whistles and handclaps become more fulsome instrumental arrangements. For now though they succeed beautifully in their simple ambition to make people happy. "Dirt Is Good" will again help to lift many of us up above our own first world problems.


Posted by Solomon Robson's Blogspot at Wednesday, August 13, 2014 No comments: