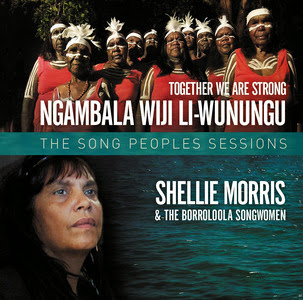 The cultural importance of this ABC release cannot be over-estimated. Shellie Morris's paternal grandmother, the celebrated Hilda Muir, was a proud Yanyuwa woman from the Borroloola region, and a member of the Stolen Generations. Shellie herself was adopted by a non-Aboriginal family and brought up in Sydney where, after some troubled teenage years, she found redemption in music.

After some operatic training she became a singer with the Black Arm Band. Parallel to this, she has spent many years touring Aboriginal communities, learning fourteen indigenous languages along the way and running countless workshops to encourage indigenous people young and old to record their stories in song. In 2011, Shellie was invited to take part in the Song Peoples Sessions - to go back to her grandmother's country in Borroloola and record traditional songs from her grandmother's extended family. Nannas, aunties, sisters and daughters came together to share their language and songs with Shellie.

She in turn composed new songs entirely in Yanyuwa, songs which pay respect to ancestors, totems and identity, songs of life, celebration and survival in the Gulf Country. There are two discs in this release - the first is made up of Shellie's own Yanyuwa compositions, performed with the Borroloola Songwomen and embellished with a lush string ensemble and great beats and atmospherics from Tim Cole (ex Not Drowning Waving) and Wantok's Airileke Ingram. The ten songs bring us a seamless soundscape of life in the Top End, celebrating the elements and the seasons and a way of life. The standout track would have to be "Ngabujiyu a-Kuija (Nanna Song)", which neatly encapsulates the emotional roller coaster that Shellie embarked on with this very emotional musical homecoming. The second disc is a priceless socio-historical document.

It brings us the pure, unembellished field recordings of the Gulf country Songwomen. Sung in Yanyuwa, Marra, Garrwa and Gudanji languages, these songs reflect everyday events and the flora and fauna that give life to the land's custodians. Songs about Rising Tides, Lightning, Seagrass, Turtles, Black Plums, Green Plums, Red Parrots and Torres Strait Island Pigeons. Songs that document a Wife Driven Away or that tell stories of Ancestral Dreaming Women who rose up out of the sea, like mermaids. These Songwomen are the social historians of their communities, and these recordings are National Treasures.


Posted by Solomon Robson's Blogspot at Saturday, November 09, 2013 No comments: