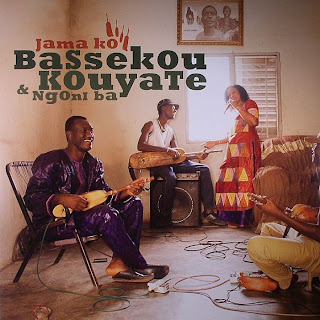 I've been featuring the music of Bassekou Kouyate and his group Ngoni Ba on 2BBB's Local Global Show for five years now. Ngoni Ba's first two releases, "Segu Blue" and "I Speak Fula", were amongst the most feted releases to come out of Mali in recent times, with the focus on the Ngoni being of great interest to musicians and audiences far and wide.

When Bassekou was 18 and playing music with Bamako's famous Rail Band, he made his first solo trip to the USA at the invitation of Taj Mahal. On visiting an African-American Museum, he saw that early slaves had taken the Ngoni with them across the Atlantic, only for it to evolve (with the addition of machine heads and other adjustments) into what we call a Banjo. The original Ngoni is like a hollowed out cricket bat with strings and Ngoni Ba were the first to experiment with a larger, bass version of the instrument as well as other sizes and tunings.

Bassekou Kouyate comes from a long line of griots who have specialised in the art of playing the Ngoni, and he is now obviously enjoying the fact that his own sons are of an age when they too can join him and their mother, the beautiful, talented and renowned Malian singer Amy Sacko, on stage at festivals and concerts all over the planet. One of my favourite tracks on this new CD is the closer "Moustafa", written by Moustafa 'Vieux' Kouyate in which he thanks his Mum and Dad for putting him through school and teaching him the Ngoni. He and his brother Madou, who plays the Ngoni bass, are only in their early twenties but they've been playing the instrument ever since they could pick one up and carry it.

The new family-oriented line-up - with father, mother, two sons and a nephew in matching colourful traditional robes - blew audiences away recently at Womadelaide with their totally-in-synch togetherness. They are as tight as any band I have ever seen and with this new CD "Jama Ko", there has been something of a shift, with performances being taken to a whole new level. There is now a far greater use of electronic effects, in particular the wah-wah on Bassekou's lead Ngoni which lends an air of breathless excitement and urgency.

Perhaps it is a reflection of the circumstances in which the album came to be recorded in Bamako in March 2012. Producer Howard Bilerman (renowned for his work with Arcade Fire) had been flown in from Montreal and Studio Bogolan booked, only for the city and country to descend into utter chaos as an unexpected military coup took place, ousting Kouyate's friend and supporter President Amadou Toumani Toure. Shots rang out barely a kilometre from where the recordings were taking place, with the radio station being the centre of the fighting. The coup changed the mood of the country overnight but somehow, between power cuts, fuel shortages and daily curfews, the recording still took place.

It is best exemplified by Bassekou's insistent "Ne Me Fatigue Pas" (Don't wear me out) a fast-paced, trance-like put down of all the shenanigans taking place around them. The chaos in the capital meant that things also changed rapidly in the North of Mali, with Islamist insurgents taking advantage and taking control, to impose sharia law and ban music in a country where music is in the blood. The title track "Jama Ko" means 'a great meeting of people' : Bassekou explains the meaning thus: "There are over 90% Muslims in Mali, but our form of Islam here has nothing to do with a radical form of Sharia: that is not our culture....If the Islamists stop people making music, they will rip the heart out of Mali". If you would like to discover the heart of this incredibly diverse and highly musical nation, you should track down a copy of this CD.


Posted by Solomon Robson's Blogspot at Saturday, March 30, 2013 No comments: 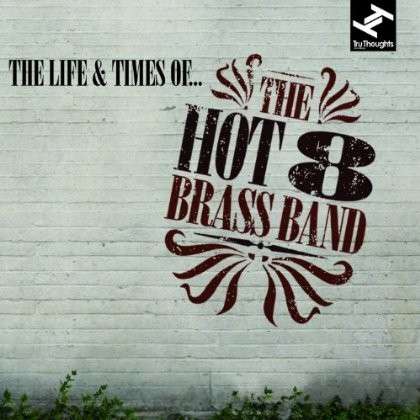 If you have ever watched "Treme" (the latest much-lauded HBO TV show from the makers of "The Wire") you will have seen the Hot 8 Brass Band in action. It is a fascinating series that documents people returning to post-Katrina New Orleans to pick up the pieces of their lives. Much of the action centres on the lives of the musicians and it vividly portrays just how central music is to the everyday life of the city.

Whether playing in the "second line" New Orleans parades, at a traditional Jazz funeral, or in a crowded bar in the Treme area, the Hot 8 grab our attention because they are so young, so talented and so together musically. Most have been playing in bands since starting High School and their youth means they bring an energy and a "street" / hiphop feel to whatever tunes they play. They do a couple of covers on their new CD: The Specials' "Ghost Town" (very redolent with meaning with post-flood New Orleans in mind) and Basement Jaxx's "Bingo Bango" - and they make both tunes very much their own.

There is a real sense of Joie de Vivre in their music that belies the hard times they have been through. Three founding members died as a result of handgun violence, with one of them killed by the often brutal NOPD with his hands in the air and in possession of little more than a trombone case. Another member was lost to drugs. A third band member gets around in a wheelchair after getting out of one car and into the path of another speeding vehicle. Many of the group struggle with health issues, with youth obesity and diabetes being such epidemic killers in their part of the world, particularly amongst African American working class neighbourhoods

"War Time" struts along, angrily propelled by the heavyweight Sousaphone and Bass Drum, with some wild Jazz saxophone, trumpet and trombone letting rip. But we're having a Party here, with a capital P, so the wild solos always give way to the catchy refrain. This is eminently dance-able music. The hiphop chants in this and "Let Me Do My Thing" illustrate their immense self-belief these days. They are now signed to TruThoughts Records in the UK and are making waves far and wide. There is a touch of the swagger of Funk and Stax Soul about the songs on this CD.

The track I keep coming back to for the Local Global Show is "Steamin' Blues" - a truly riotous piece, swinging along and featuring virtuosic displays by all of the ensemble in the best Jazz traditions but with a thoroughly modern day street-oriented take on proceedings. Further emphasising this, the sleeve is adorned with an array of amazing graffiti artworks created by Banksy in New Orleans after the flood, which cleverly satirise the social issues facing the Hot 8, their neighbours and the other inhabitants of Treme.

Posted by Solomon Robson's Blogspot at Saturday, March 30, 2013 No comments: