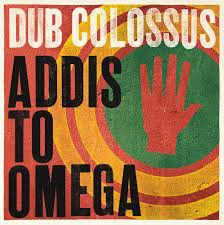 In another fine example of artists raising the cash required for recording through crowd-funding and releasing the resulting music direct to their audience from their own website, Dub Colossus have just unveiled their new "Addis to Omega" CD.

The release, somewhat cannily, is out just in time for the summer season of sun and festivals around the northern hemisphere - and it's also just in time to warm up cold mid-winter nights here down under. The Dub Colossus trademark brand of dub reggae music is guaranteed 100% sunshine this time around.

This is their fourth album (following "A Town Like Addis" and "Addis Through The Looking Glass" and a remix CD of both,"Dub Me Tender Vol1&2") and what started back in 2008 as a mix of Ethiopian and London-based musicians and styles has metamorphosed into a more Jamaican oriented project. This is largely due to the vagaries of costs and visa problems for the Ethiopian musicians, but the enforced change does give this new CD a tad more commercial appeal than its predecessors.

Since his days with Transglobal Underground and Temple of Sound, Nick "Dubulah" Page has been busy with projects such as Syriana and the Balkan infused Kabatronics and this incarnation of Dub Colossus is his latest brainchild. For "Addis to Omega" he's recruited the Horns of Negus, Jamaican veteran Joseph Cotton, PJ Higgins, Mykael S Riley (of Steel Pulse fame), Natacha Atlas and Winston Blissett. Just about every sub-genre of reggae is lovingly revisited: From Cotton's Dancehall opener "Book Ka Boom", to the sweeter Lover's Rock vocals of PJ Higgins on "Happy Face", with heavy dollops of Dub here and some Roots there.

The over-arching "theme" through many of the fifteen tracks is the GFC and the flagrant economic injustices around which the Occupy movement coalesced. Titles such as "The Casino Burning Down", "We Are The Playthings of The Rich", "Fight Back" and "Madmen" will give you the general gist of where we're headed here. The latter in particular features a tired, cynical but sonorous half spoken / half sung contribution from Dubulah himself, hopefully the first foray of many into the lead vocal realm.Its lyrics cleverly put the mad, bad bankers and speculators who so affect our food prices and daily lives to the metaphorical sword. But it's all done to the rootsiest, rockiest most joyful backdrop I've heard in a long time.

With the Horns of Negus (Flugelhorn, Tenor sax and all) at full bore, there are copious passing references to Funk and Motown. When the individual brass intruments are occasionally let off their leashes, there is a wild jazzy feel to proceedings. "Mi Dad" harks back to early eighties Brixton and the reggae poetry of Linton Kwesi Johnson. Just about all of the ghosts of reggae past make an appearance and the production values remain firmly in the dub-style camp. For me "A Voice Has Power" is the absolute killer track featuring some fairly heavyweight insistent Dub and the utterly powerful, growling muti-tonal voice of legendary Tuvan Throat Singer Albert Kuvezin, before the sprawling dubbed and jazzed up "Orpheus Underground" brings things to a close.

As the promo single, you can download the ska-flavoured "Madmen" from the band's Soundcloud" page da nada. Here it is:

Posted by Solomon Robson's Blogspot at Thursday, June 26, 2014 No comments: